“Relax – everything will be fine!”

This was an eye opening experience which all happened over Zoom.

Since experiencing my NLP session with Stephanie there have been many changes. My thought process and patterns are more positive, my trust and outlook on life is more productive and I do not find myself reacting to situations in the same way that I did before. I am more flexible and easy going – which I think is a great skill that most people would like more of in their lives!

Stephanie began by asking me what I wanted to work through. I identified an emotional reaction I wanted to change and then Stephanie asked me for an instance where this had been a problem.

Stephanie had me revisit that event in my mind, look at the feelings and sensations before, during and after. We discussed what I was thinking would happen and what I was worried about and what actually happened. In essence we picked apart the event, what I did, how I felt.

Little did I know at the time, but Stephanie was trying to figure out the self limiting belief hidden in my subconscious. This is what we spent the next part of the session working through.

Stephanie asked me to respond to a series of statements and let her know which one “tugged” at me. This was how we began to narrow down the self limiting belief of my subconscious that we were going to work on releasing.

Once we had identified this belief Stephanie began the process of releasing it. She told me that these beliefs sit in our past and start with a single incident. It could be a trauma or a small event that sets up this pattern of behaviour or emotional reaction as a result of this belief. It is a single incident that is buried in our subconscious.

Stephanie took me back to this first event through a time coding exercise where I was looking down on the past and popping in and out of different moments in my timeline. Rather than focusing on what happened we identified what the major learnings were from this event and focused on that to clear and release this self limiting belief.

This was an eye opening and interesting release for me. I felt myself smiling at the potential future, void of this belief. If you would like a chance to identify areas of your life that could be limited, then give Stephanie a call for an NLP session or training. She makes you feel comfortable and capable of working through anything that is “inside your mind”.

What services do you offer?

Training in NLP, including certificate trainings (NLP Practitioner, Coach and Master Practitioner), coaching, mentoring and therapy. I’m working on an online course at the moment called Minding Your Mind. It’s for people suffering from anxiety and stress. Plus I have some books I’ve authored available on my website.

Why is this work so important to you?

I’m driven by helping people to get unstuck; to step out of tick-tock and live life on their terms. I’ve found people unintentionally hold themselves back because they’ve never been taught how to use their minds. When they learn to change, their minds can shift their thinking and dissolve mental blocks. They leap off any emotional merry-go-rounds and disrupt any negative social programming. They empower themselves and gain success in ways that are meaningful for them.

Could you tell us about how your interest in NLP began?

I was at a Training and Development conference in Wellington in the early 1990s and there was a speaker who mentioned Neuro Linguistic Programming (NLP) in passing. He also talked about a book. The book’s title and the very little he said about NLP intrigued me, so I bought the book as soon as I could get hold of a copy.

That was it! It was the most amazing thing I’d come across. I’d taken so many courses up until that point but I was kind of ‘ho hum’ about them all. But the book blew my socks off. I spent the next few years finding out how I could learn more.

What obstacles did you face to get to where you are now and how did you overcome them?

I’ve been in business since 1994, and all businesses have their ups and downs. I’ve been married – and divorced. I’ve been able to help people at some of the worst times of their life.

From a business perspective, most people had never heard of NLP when I started and the ‘programming’ part put people off, because they thought it sounded like mind control.

I used to say, “It is mind control — it’s about you taking control of you own mind, instead of allowing the programming you’ve received from parents, teachers, the media etc to control your life.”

Who should seek NLP as a holistic wellness technique? 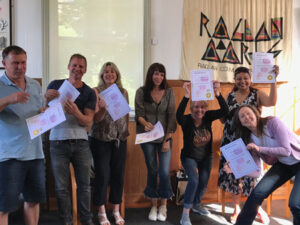 NLP is a lot more mainstream these days and is used in just about every field of endeavour. If you read the testimonials on the website InsideYourMind.com most people will tell you NLP is for EVERYONE! However, I like to train people who want to make improvements in their personal and professional life and/or want to positively influence others in their growth and development.

As far as individual wellness is concerned, NLP can help with just about anything. A good NLP Practitioner will help you make the changes you want without dragging you through any negative or traumatic experiences. So don’t expect a talk-fest!

Could you share a wellbeing tip with the community?

This might sound glib but it will be life changing: Take responsibility for everything that happens in your life. Don’t blame others; think what you can learn from your experiences and become a sovereign being who is in control of your own thinking.

If you could tell your younger self one thing what would it be?

Relax – everything will be fine!

– Experience and Interview by Vicki Shannon

Stay up to date

Our No-Hassle Email Newsletter will keep you up to date with holistic healers and practitioners, plus local Healing News and Events.

You can Unsubscribe at any time.